The 10 Best Suits at the NFL Draft

If you’re wondering who wore the best suits at the NFL Draft, we’ve got the list and you won’t be disappointed. The draft is turning into a night at the Oscars with the players coming out in their prime time best. The best-dressed looks ranged from vintage two-piece and double-breasted suits to a few velvet smoking jackets and other fine men’s attire.

Let’s take a look at the best suits at the NFL draft:

At 6’4″ and 275 lbs, the No. 5 pick knows how to show off his finest in men’s apparel with his own personal style. Bradley wore a jacket that included his own creative fashion sense, a celestial lining. While this might sound out of this world, or out of the ordinary, it’s not. Many men’s suit jackets and blazers can include custom silk linings that have traditionally been in a paisley pattern or favorite print.

For a similarly bold look, Ravazzolo is the best designer offering audacious patterns in their suits and jackets. Whether it’s for a formal event or something more relaxed, a bold look becomes refined and their fabrics are ultra comfortable. At 6’5″ and 340 lbs, this No. 12 draft pick chose a very classic velvet jacket and used a lei with beautiful and bold colors of yellow, white and green. It was the perfect way to show his heritage and pride for the Hawaiian islands and display his elegance! For slimming blazers and formal suits, Eleventy offers a lax look that’s still formal and reserved. The look can bring out a man’s expressive fashion sense.

The velvet style was a big hit as it made more than one appearance at the draft. Here, Wyoming’s seventh pick Josh Allen clearly shows his more elegant and finer side! Canali offers a wide range of sports jackets, tuxedo jackets, suit separates and suits that are elegant and show a man’s confident side.

Saquon with the NY Giants chose to go for a more classic approach and picked a tuxedo that included maroon with black undertones. As the second pick, he was all decked out in his James Bond-line attire! When looking for suits or jackets with bold patterns or subtle looks, Corneliani is just right for chic parties and social gatherings. It’s elegant sophistication at its finest!

Minkah Fitzpatrick with the Miami Dolphins

Minkah, who was the 11th pick at the draft, decided to step out in his Sunday best so we’re certain he has an expressive fashion sense. He chose a cream-colored, double-breasted suit that included gold buttons. He also had on a black shirt and tie to match his ensemble. Very stylish indeed! Like Minkah’s attire, the best men’s suits are more of a statement and legacy. Explore Circolo 1901 for its similar dedication to traditional looks and authentically sharp attire.

Rashaan’s starting a fire over here, as the No. 23 pick showed up in a fiery red suit that was one of the standouts of the night. With a slim-fitted white dress shirt that he wore open and his designer sunglasses on, he was ready for the party, and the after party! As the draft’s No. 17 pick, Derwin showed off in a sparkly reddish wine-colored tuxedo jacket with a wide lapel. His form-fitting silky black shirt was the perfect accompaniment and black pants rounded out the look. For jewelry — which we didn’t see a lot of at the draft — he wore a chain and his million-dollar smile! To match Derwin’s class, try Hugo Boss. This brand knows how to dress men and if you need tuxedo jackets or suits for a wedding or other event, they have single and double-breasted suits that offer stretch and style.

Jaire, the No. 18 draft pick, was one of the stars of the night, showing up in a classic and elegant red three-piece suit with a very bold leopard print and matching leopard shoes. Jaire’s pairing of a traditional three-piece suit in a unique color made for one of the best suits at the NFL draft. It was a way to express his unique style and stay fashionably unmatched by his rivals. For lavish three-piece suits, consider Coppley from master Italian weavers. You can snazzy up a suit with a vest and matching tie and showcase your style for any occasion. Look for Super 110s, which features a thread count that’s a bit softer and more pleasing in the drape and folds.

As the No. 32 pick, Lamar played college at Louisville and won the Maxwell Award, the Heisman, and the Walter Camp Award. He stole the night in his Gucci green suit with matching Gucci belt, shoes and possibly other accompanying attire! 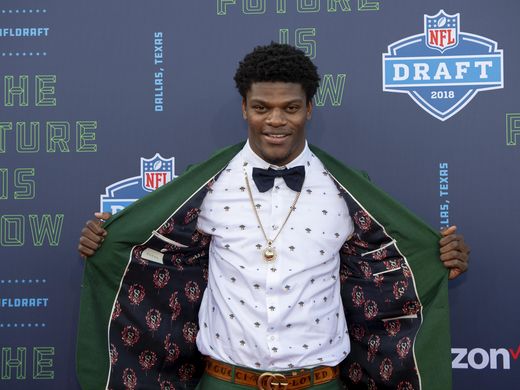 For a similar look, check out one of the best luxury men’s suit makers: Canali. Menswear that’s impeccable in any season, this brand uses a fabric called Impeccabile 2.0, which is a lighter wool blend that’s comfortable, elegant and super fine, like Lamar’s draft look!

One of the best suits at the NFL draft, the No. 3 pick chose a subtle and elegant blue suit with light blue piping. His tie and handkerchief were a matching tan color and he chose a simple white dress shirt and silver tie clasp to finish out the look. 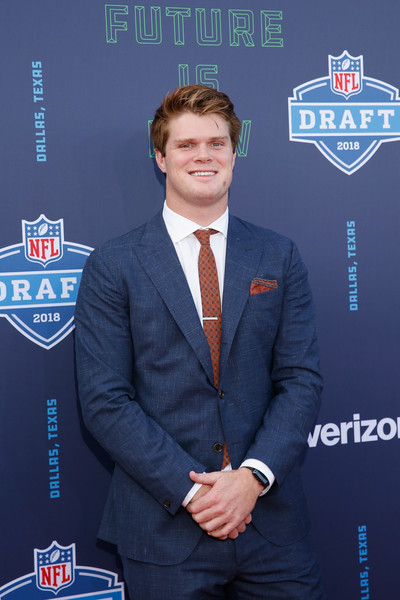 For a similar contemporary and iconic elegance, Brioni makes suits like Sam’s that are comfortable in the summertime and won’t absorb a lot of heat. The looks are a bit more formal, but some of the finest in exclusive menswear and dress wear.

The draft showed the best and finest styles in men’s fashions. If you need a Bergen County tailor, for the best suit brands for men and the finest in custom men’s suits, high-quality men’s fashions and men’s tailoring, shop at Sal Lauretta. If you want the best custom suit jackets in NJ, ask for Sal or Ralph.